There is a physiological and a social (social includes the psychological) definition of addiction. Currently, it’s the physiological manifestations of substance and behavioral addictions that receive the bulk of researchers’ attention. Understanding the impacts of changes in brain chemistry on the entire body is contributing to more effective treatment.

people are likely not addicted to work itself

People are often labeled as workaholics when they appear to be spending too much time at work. But a so-called addiction to work is not classified similarly as other behavioral addictions; like addictions to exercise, gambling, eating, sex, pornography and Internet gaming. Why? First, because it hasn’t been studied as much as these other behavioral addictions. Second, because people are likely not addicted to work itself, but rather addicted to some aspect of their jobs: work initiation, work completion, or obsessive-compulsive behavior regarding one or more work tasks. However, it’s the social definition of a workaholic that is problematic for many of us.

If you answer Yes to 3 of Workaholics Anonymous’ 20 Questions for Newcomers, then, they say, you may be a Workaholic. I was able to answer Sometimes Yes to 14! Fortunately, I wasn’t able to answer Mostly Yes to any. Unfortunately, Workaholics Anonymous doesn’t give us the option to answer Sometimes Yes or Mostly Yes. So, am I a workaholic? No, but I do find deep purpose and meaning in my work; and I’m very lucky to be able to spend a lot of time working. Through my work I’m able to contribute to the wellbeing of others and myself.

work is a perfectly acceptable source of meaning

Humans need to believe life has meaning. Also, humans are meaning-takers, not meaning-makers. Meaning taking means that we are exposed to many sources of meaning and we need to choose (take) one or more of them to define our identity and give meaning to our existence. Deep stuff, but true. One perfectly acceptable source of meaning is work. Some people have made the world better by dedicating themselves to their work. It’s often people dedicated to the deep purpose and meaning they find in their work who are responsible for the greatest leaps forward in science, medicine and civil society. We admire these people.

the first ones to be called workaholics

But on a smaller scale for the rest of us, people who are able to find purpose and meaning in a regular job also contribute to the wellbeing of others. They do more. They do better, and, yes, they spend more time working. And, they are often the first ones to be called workaholics, but by who? People who lack meaning in their own work, or find meaning in places other than work, often label those immersed in their work as workaholics. Of course, this isn’t always true. Some people are workaholics. Someone watching me right now, as I write this article on a sunny afternoon, while on “vacation,” from the rooftop bar of my hotel in Malaga, Spain, as my wife is out shopping, is probably thinking I’m a workaholic. 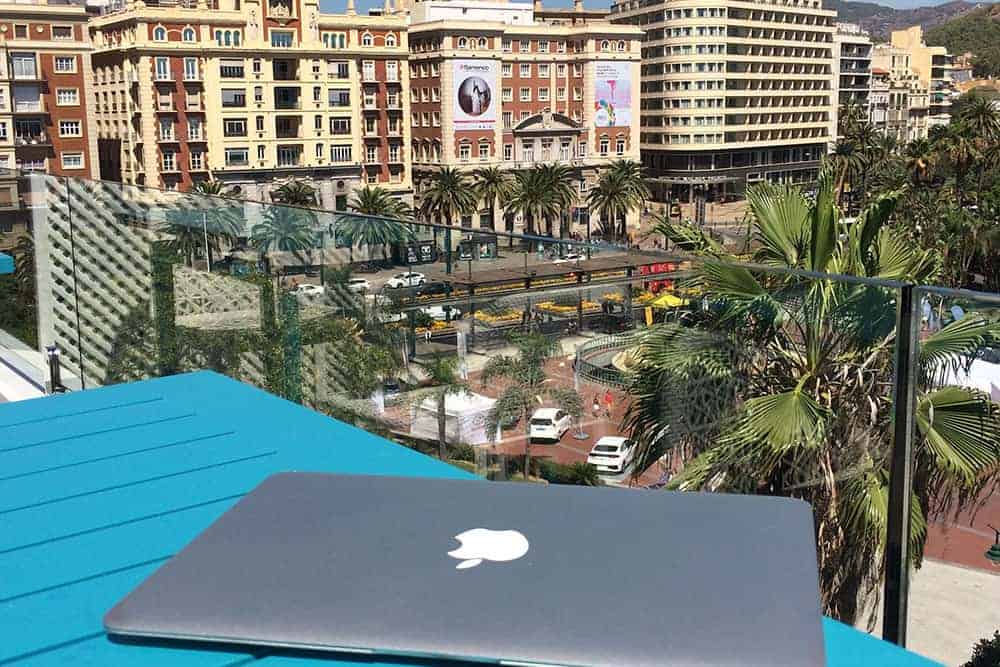 My “office” in Malaga. TM

social definitions tell us how a “normal” person should behave

So how can we tell if we’re workaholics or if we are just healthily immersed in meaningful work? Outside of the physiological manifestations of obsessive-compulsive behavior at work, it’s the social definition of a workaholic that can guide us. Social definitions tell us how a “normal” person should behave; and they can, sometimes, be helpful. Of course, few things have caused as much pain and suffering as the majority telling a minority how they should behave.

A good social definition of a workaholic, and the one I prefer, is a person whose work is getting in the way of how they really want to live their life. If you think you might be a workaholic, ask yourself these questions:

·      Do you consistently immerse yourself in work to avoid dealing with some other aspect of your life that really should be dealt with?

·      Do you regret your immersion in work, but you’re still immersed in a way that you already, or will soon, regret, again?

·      Do you want to be less immersed in work, but haven’t been able to change?

If you answered Yes to any of these questions, then I’d say you have a problem with work.

In Part 2 of this article, I’ll describe what I think is a healthy immersion in meaningful work. Right now, I’ll stop working and join my wife for lunch.